It pays to keep your eyes open

It's one of  those lucky finds I guess.
Last September, I had stopped to post a letter in a letterbox and saw a man throw a big garden tub, with what turned out to be a maple planted in it, into a skip.
I had a look at the tree and found that all the leaves had shrivelled up.  I knocked on the door and asked if he minded if I took the tree from the skip and he had no objection, saying that it was dead.

I took it back with me and when I took it out of the pot, I found that it was planted in a mix of soil, broken up polystyrene boxes (?) and bits of rock, covered with a thin layer of potting compost.
I scratched some of the bark from the trunk and some of the branches and found that it was still green under the bark.  I washed the roots clean removed as much of the rocks and polystyrene that was wedged into the roots.  Some of the rock had to stay as the tree's roots had grown over them and they could not be removed.

The tree was then planted into a well drained mix of John Innes, Peat and grit, given a good watering and put into dappled shade.  I have just checked, and the tree seems to be ok.  Although some of the finer branches have died back, there are some plump healthy buds on most of the branches. 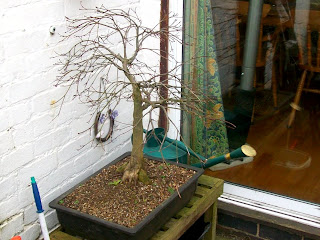 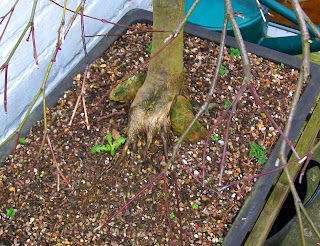 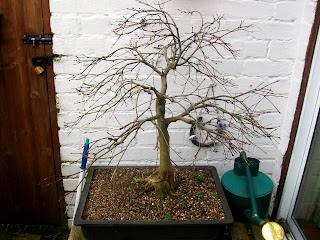