This tree has been a long term project, so I thought it worth sharing. 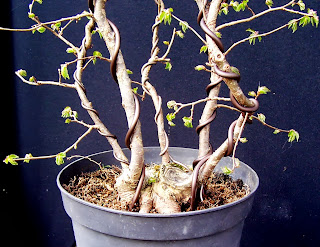 When I got this elm some years ago, it was basically a lump of root, with a few shoots sprouting from the top.  It was potted up into a standard plastic garden pot and left to grow wild with just the occasional trim to prevent the top from getting too heavy. It responded well to the treatment and within three years the shoots had grown into usable "trunks".   Some wire was applied to bring a little movement into those trunks as they were basically growing straight upwards. 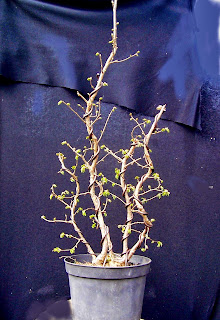 The tree was again allowed to grow freely for the rest of the growing season, with plenty of water and feed,  in order to set the trunk shape.  The wire was removed just as it started to bite into the bark. 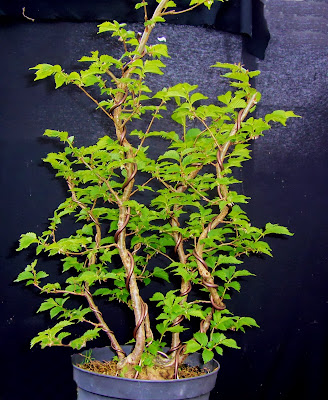 The following year, I thought it was time to see what the root system looked like and in order to produce a shallower root system, the tree was repotted into a mica bonsai pot. 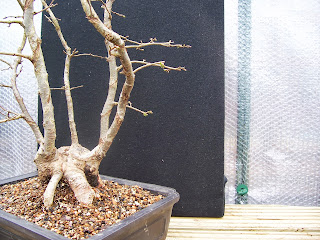 The root ball had some very thick roots that had started to curl around the side of the pot, but fortunately, there was also plenty of fibrous root.
The heaviest of the roots below the base of the tree were removed at this stage and the tree was potted into a free draining mix of akadama and kyodama. 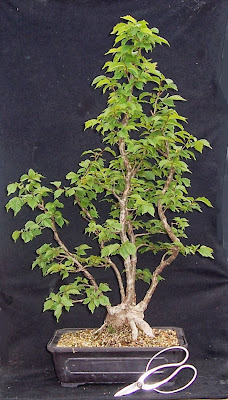 The tree didn't miss a beat, and grew just as vigorously as in the previous years.

Again, the top branches were kept in check in order to keep the lower branches growing strongly.

As you can see from the picture, the base of the tree is far too heavy and sits too far above the soil line to give a convincing image of a clump style tree.  There is no discernible nebari, apart from the remnants of the heavy roots that were too thick and straight.

I decided to slip pot the tree into a larger and deeper pot to allow for strong root growth with a view of ground layering the tree in the following year.

Again, I used a free draining mix to give me maximum root growth and used a high phosphorous feed to promote root growth. 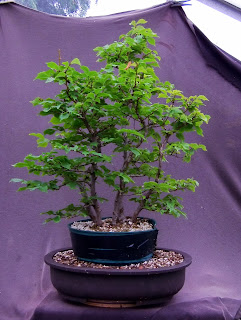 This April, I removed a ring of bark just below the point where the trunks were growing from the trunk.
I made sure to scrape away all traces of cambium in order to prevent the tree from bridging the gap.

A plastic pot with part of the base removed and split to allow it to be fed around the trunk was put in place and a layer of weed suppression membrane was laid into the bottom of the pot to prevent any new roots from growing into the soil of the original pot.

The pot was then filled with damp sphagnum moss and topped with a layer of pumice to help keep the moss damp.  The split in the pot was closed with a few turns of waterproof adhesive tape, and the tree went back to the growing area and left to grow unrestricted. 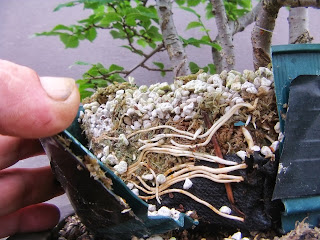 This morning I checked to see how the layer was doing and was pleased to see plenty of new plump roots growing in the moss.

As you can see, the weed membrane had done its job and contained the roots within the moss, making removing the layer a lot easier. 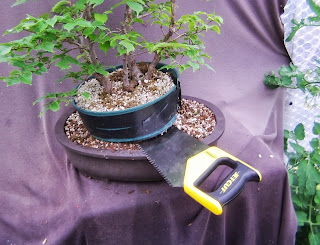 With all of the new root contained in the secondary pot, it was simply a matter of running a saw through just above the original soil surface to sever the layer from the original trunk. 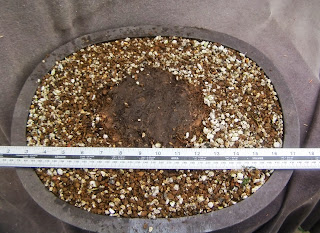 This picture shows the original base of the trunk after the layer was removed.  At it's widest part it is just under 6 inches wide.

This will go back to the growing area in the hope that it will sprout new growth to use in future projects. 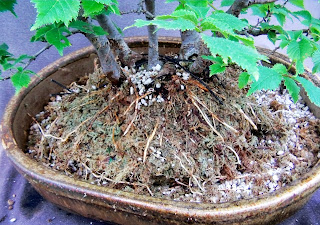 I removed the severed layer from it's pot and carefully removed the layer of pumice and any loose moss from the top of the layer.

The weed membrane was then removed from the base and the tree was placed into a large shallow training pot on a layer of a very coarse mix of Pumice, Akadama and Kyodama.

Two loops of wire secure the tree in the pot to prevent any movement. 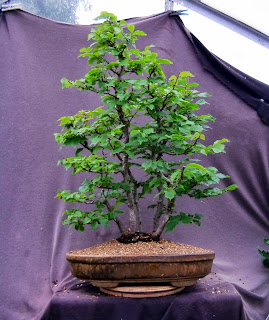 The pot was then back filled with the same potting mix, which gives good water retention, while still giving excellent drainage.

The tree will now go back into the growing area, where it is out of any wind and in dappled shade.  The foliage will be misted twice a day in order to help the tree cope with the reduced root system.

The tree will be repotted next spring, at which stage the remaining moss will be removed.  At the same time, the remainder of the old trunk that is still attached to the base of the layer will be ground back and sealed.

I will report on that when it happens.